On NaNoWriMo: The Good, The Bad, and The Ugly

A friend of mine is currently working on revising/editing his first big novel. He's also blogging about it, which means he's sharing the fun with all of us. I invite you to check it out and cheer him on.

But regardless. We got to talking over Twitter, and somehow, NaNoWriMo came up. His response was: "...my concern isn't whether I'll try or not, it's whether the result will be any good."

So let me ask you a question: if you're trying to write a novel in a month, 50,000 words, is the result guaranteed to be good? Well, no. In fact, sometimes it's a total crapshoot.

I've naturally gotten better over the years -- Blue Impulse and Dvorak Classic are both NaNo novels (okay, Camp, but officially), and Steel Angel is as well. I'm currently workshopping my 2011 NaNo with my writing group. But don't ask me about 2007. That novel will basically never see the light of day again. And 2012 has some serious work to be done before it can see the light of day (mostly because it's the sequel to 2011's).

So why do I still do NaNoWriMo if I know I won't get a good result every time? I've mentioned this before: the community.

No matter where you live, there is likely to be a group of people -- PHYSICAL PEOPLE -- near you who will also take part in this November challenge. Official volunteers set up groups and events that you can go to, take your writing apparatus, and sit and write. I should know because I used to be one of these volunteers for five years.

But don't think that all we do is sit and write. A year after I left the Oxford, Ohio NaNoWriMo region, I visited them on a weekend for an event. I brought cookies and smiles, and got yelled at by one of the writers saying everybody had to focus and stay quiet.

I wanted to throw something, but all I did was throw myself out.

The beauty of NaNoWriMo is its ability to take itself seriously and NOT do so at the same time. People come in with varying levels of preparation. I come with my plan, which I'll be detailing when it gets closer to November. Some people come only with their laptops and no idea how they're going to get through the month, but they want to. That's enough to start, but usually not enough to finish with.

This is why I ALWAYS recommend first-timers to go to as many events as possible. Being around other writers is infectious, and plus, it means you inevitable glean ideas for your own manuscripts, NaNo or not. I would recommend going to the events even if you don't 100% know you'll be doing NaNoWriMo. It's good for sitting and writing sprints, but it's also good for your self-esteem. The other writers there are all writing, and it's not a competition to see who does best.

It's like a running race where everybody strives to cross the finish line, and where the racers run back and help support the people behind them. The words "I will not let you have this cookie until you meet quota" are pretty commonplace, but so are "Do you need a hand massage?"

And at the end of the month, you have 50,000 words. Unless you're me, in which case there's usually a bit more. Regardless. 50,000 words. Perhaps they all suck. Perhaps you will delete the file immediately. So what? After 50,000 words, you have a group of people who remembered you did the event and won't forget you're a writer. Some of those people will also be in local writers' groups, which will give you a chance to meet year-round. This happened both in Zanesville (the Y-City Writers) and in NYC (the critique group I mentioned before). And sure, you can join groups year-round, but there is something about November and the frenzy and the tornado that sucks you in.

Email ThisBlogThis!Share to TwitterShare to FacebookShare to Pinterest
Labels: being creative, nanowrimo, writing

I told myself I would sit down and write a blog entry today, because it had been a while since I had written one. Of course, getting up out of bed and not watching soaps/daytime television/sitting in bed reading manga/playing Pokemon/generally feeling sorry for myself is never a good idea, though it always seems like one when you're stuck in it. We all get depressed for whatever reason or another, and that's what I'd like to try and tackle today -- as well as to my solution.

When We Last Left Off: At an open stage in Coney Island, a mysterious girl named Milaya ran off with the boombox.

Just giving a quick update in the middle of the week here.

As many of you are already aware, I will have a table at the one and only 2013 Y-Bridge Arts Festival in Zanesville, Ohio! I am SO excited to go home for a little while, I can't stand it (and I'm not lying). The Festival happens every year, but due to construction, they almost had to cancel it. Instead of being at the bridge this year, it will be at the mall on the north side.

I will be bringing my violin and performing at 11:00 AM on the main stage! I'd love it if you all came out to support me. I don't know if I will be playing piano yet but the violin will definitely be out and about. I may even throw spontaneous performances in the middle of the mall if they let me.

PLUS: I am working out details as I type to also exhibit and sell at the First Friday event in downtown Zanesville! I'll have a working link when I get that information -- my awesome friends at the Y-City Writers are setting this up. 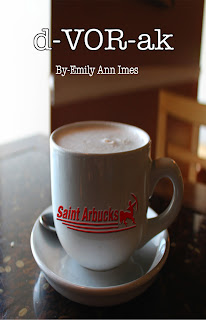 At both events, I will have:
-- copies of Blue Impulse and Taconum Carnival for sale. Take this time to pick up copies and get signatures. (If you've already bought my books and want them signed, bring them!)
-- copies of Dvorak Classic!  The final printed copies are available in their first form (cover courtesy of my good friend Milton Ian "MyL10" Piñeiro) and it's only $5 to pick one up (mostly to cover the cost of production). In addition, I have picked up some fun pens with the "d-VOR-ak" logo on them, so pick one up while stock lasts!
-- new copies of my LATEST CD! I don't have any graphics or previews yet, but trust me when I say this is a CD you won't want to miss. I haven't released one since two years ago when I published Almond Dust, so it's high time we heard from my musical side again.

If you are planning on coming out to the Arts Festival, PLEASE LET ME KNOW! Either post a comment on Facebook or comment below to let me know. I'll make sure to let you know what's going on and keep you all updated on the latest information. Be sure to use and abuse the "Y-Bridge Arts Festival" tag, and I'll see you all again soon!


In today’s article, I will tell you who I am -- my background, things I like and dislike, what not -- as well as who *I* am -- how I’m somehow qualified to sit on my chair and blog about writing, and why you should listen.

So I spent the better part of the past week on vacation in North Carolina. Being out in the middle of nowhere warrants next to no phone service and very spotty Internet. It also makes a great place to reconnect with yourself instead of being bombarded with lots of people needing your attention. Sure, I downloaded a lot of stories from Wattpad, but I spent equal times reading and playing solitaire without a care in the world.

It was really refreshing, and because of it, I probably don't have much to show for it (other than a sunburn). But I think we'll see how this trip spreads throughout the rest of my life soon.

This next week, I have an album to work on...and I still don't have a title. Any suggestions? :S

How To Be 100% Perfect In Everything You Do

There’s really only one secret to being 100% perfect.