Because really, these things go way too quickly to be coherent.

This year's New York Comic-Con was, in my opinion, a completely different beast than last year. 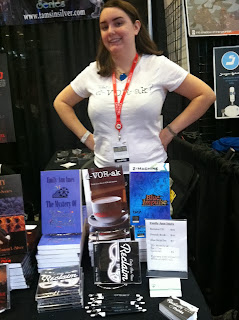 I'm not just saying that, either. The general consensus across the board was that it was a different sort of con. There was less foot traffic, probably due to the fact that they stepped up against counterfeiters (finally), and there was more space as the construction at Javits was done (for the most part -- outside was still a mess). In addition, in my opinion the anime and manga community seemed much smaller than in years prior (though this didn't hamper the amount of Attack on Titan cosplays).

All in all, it was good.

I wanted to thank everybody who could for coming out (considering the badge situation). We sold a lot of books! If you ended up with one, I'd love to know what you think of it. Our plan is to return in 2014 with a full-out Dvorak booth, complete with cosplay, games, and who knows what else. Dvorak will be at the end of its third book by that time, so who knows? I guess our plans could change, but you never know with these things...